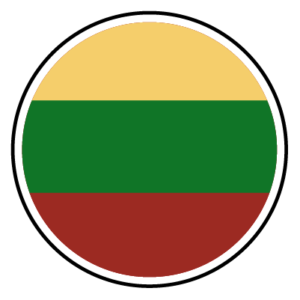 Both Rasa and Arūnas Rutkauskai grew up on farms. Eager to follow in their parents’ footsteps, in 2014, they established their own farm in the same village on a three hectare plot bordering Ančia River. They started with an old Soviet building, one of the mechanization buildings of a Soviet collective farm. That same year, they started importing heifers.

Today, Rasa and Arūnas manage 72 hectares of agricultural land, where they cultivate spring cereals, maintain meadows and pastures, and care for their herd of cattle which currently totals 82 heads.

The farmers have practiced sustainable methods from the start. A tradition inherited from their respective grandparents, who instilled them with a deep respect for the land.

“All agricultural work must be carried out in time and according to basic requirements, along with the understanding that we will not have another layer of soil or another water resource,” says Arūnas.

“The very realization that the earth is a planet on which our children and grandchildren will live obliges us to protect the environment.”

Further bolstering the farmers’ commitment to sustainable practices is their knowledge of the problem of eutrophication, and their desire to pass along a farm, and planet, that their children will be happy to inherit.

“The very realization that the earth is a planet on which our children and grandchildren will live obliges us to protect the environment,” says Rasa. “This is our main incentive to farm sustainably. It is more enjoyable for us to work when we know that our activities are not harming the environment.”

“We are also very happy to be able to enjoy farm life together with our children,” Rasa adds. “They are learning from us, supporting our activities, and are dedicated to continuing using sustainable farming practices in the future.”

“Although the description of manure and slurry requirements is valid everywhere, the way they are complied with is important,” says Arūnas.

The farmers feed their cattle farm-grown grains, which are crushed and combined with biological preservatives. They use an abundant amount of straw in the barn litter and, in order to reduce the emission of nitrogen and other substances during the barn period, they treat the litter with biological substances that promote the decomposition of organic matter by fixing nitrogen.

“When we started using these substances, we noticed that less manure was formed, it did not heat up, there was no specific smell, and there were less flies,” recalls Arūnas.

The manure is then applied to the fields as fertilizer. When it comes time to plow, the farmers use a manure shaker to distribute the manure very finely in one layer without scattering larger pieces. Their tractors are equipped with wider tires for minimal soil compaction.

For added protection of local waters bodies, the farmers maintain unplowed buffer zones around the canals and along the river. Furthermore, the farm abstains from the use of herbicides, fungicides or other harmful chemicals in all their operations.

The cows on Limousin Cattle Farm graze in natural meadows. In order to preserve the surface layer of the pastures, Rasa and Arūnas employ a unique strategy they developed themselves.

The farm’s grazing season starts in June and the calves are weaned in late summer to prevent the grazing areas from being trampled during the wet autumn period. Areas of own land are periodically limed, deep plowing is not used. Herd management has been optimized to separate weaned calves and bulls from the herd by September to minimize trampling down the meadows in the rainy autumn.

“It took two to three years to identify the tools that were right for us. Proper and timely manure spreading and plowing in a shallow layer and liming have allowed for a more abundant harvest.”

“Sometimes, our farm management decisions seem very strange to other farms,” says Arūnas. “They often wonder, ‘Why do we start the grazing season not in April but in June?’ ’Why are calves weaned in mid-summer rather than November?’ Or, ‘Why do we use probiotics and other tools to treat litter because they cost money and the farmer always lacks money? But we are confident about our actions.”

Another preservation measure the farmers follow is abstaining from plowing the natural grassland areas. They sow grass mixtures on the farm, so the meadows are renewed every four to five years, apart from the areas considered natural for grazing. To encourage grass rooting at the beginning of the grassland vegetation, they only use a minimum amount of mineral fertilizer.

When Rasa and Arūnas started farming, about 90 percent of their land was degraded by weeds. But, since implementing their manure and grazing strategies, they have seen the plant species composition in the fertilized and grazed meadows change in a positive direction.

“Our arable land is rich not only in wild birds but also in moles, which is a sign of the emergence of earthworms in the soil,” says Rasa.

But the result the farmers didn’t expect to see was a richer harvest.

“The yield of both our meadows and cereals has exceeded our expectations,” says Arūnas.

“It took two to three years to identify the tools that were right for us. Proper and timely manure spreading and plowing in a shallow layer and liming have allowed for a more abundant harvest.”

The farmers now share what they have learned with other farmers in their community. Among other activities, they participate in the Educational Animal Husbandry Program, as well as the Association of Organic Beef Cattle Breeders.

“Some neighbors, fellow farmers and partners support and encourage us to set an example, while others do not understand,” says Rasa. “However, we feel we are moving in the right direction because the children understand and support us.”

In recognition of the efforts made on Limousin Cattle Farm to reduce nutrient run-off, Rasa and Arūnas Rutkauskai have been awarded with the national Baltic Sea Farmer of the Year Award for Lithuania.

“We don’t feel like we’re any different or exceptional,” says Rasa. “By filling out the form, we just wanted to publicize our activities without expecting to win. We feel the surprise, the joy and, ultimately, the obligation, of being the national winner of the competition.

“We will strive not to change our farm strategy, to remain friendly to the environment. In the future, we will continue to learn from our colleagues in Lithuania and abroad, as well as apply for innovative measures on the farm in cooperation with scientists. Anyone can come here and make sure that this type of farming is right for people and the environment.”

“The most important thing is to not be afraid to change your thinking and farming strategy,” says Arūnas. “Benefits are not always financially expressed or received. Let us not be afraid to learn from others and not hold back from sharing our experiences.”

“The farmers show great responsibility for the farm’s surrounding environment and serve as a good example of environmentally friendly solutions in cattle keeping, which is a demanding part of agriculture in general. They are also strongly motivated to improve their farming techniques in the future. ”

Arunas Rutkauskai on the future of farming

A: Farming is a business that is highly dependent on nature. Farmers often blame politicians and buyers, but let’s look at the technology used on our farm, the cost of the produce, and start adapting to the challenges. We believe that one of the biggest challenges is climate change and warming, so we need to be prepared for that. In the future, farms will face the problem of land resources, as all farms use tractors with internal combustion engines, which are thus polluters of nature, and will have to adapt to environmentally friendly resources. It is not known when we will start using solar-powered tractors, but it will definitely happen.

A: Agriculture remains the main source of nourishment of mankind, and modern technologies allow for smart farming, conserving not only farm resources but also natural resources. Proper farming benefits nature because uncultivated land promotes carbon emissions. In the future, innovative technologies will allow for a more rational use of natural resources, generating higher yields.

A: Dissemination of innovation and good practice is essential to enable farms to experience the benefits of good farming themselves. Only the willingness of farmers to change, and to change their management strategies, will lead to sustainable farming results.