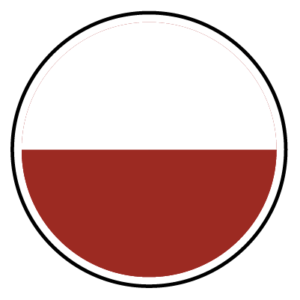 The history of Kokocińscy Farm most likely dates back to second half of the 19th century, evidenced by a beam in the barn that’s engraved with the date  “24 Jun. 1864.” However, the earliest mention of agricultural activity comes from a text written by Patryk Kokociński’s great-great grandfather in celebration of the Polish Constitution day in 1926. By the beginning of the 21st century, three generations of farmers were working hand-in-hand on the dairy farm: Patryk and his brother Karol, along with their parents and grandparents. 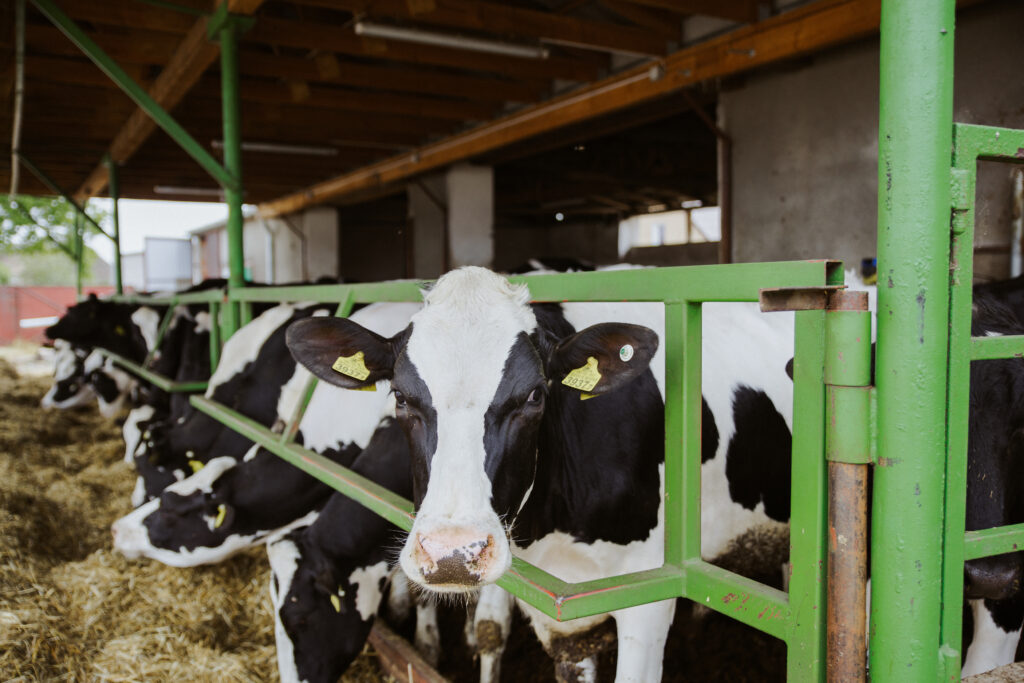 By the time Patryk became involved in the farm’s management, his predecessors had already amassed a number of medals and distinctions for their production and breeding results. By 2014, the farm’s area and number of animals had increased nearly three times and annual cow milk production had grown to the third largest nationwide.

“Today, our goal for the farm is to maintain the same production result levels while, at the same time, implementing responsible agricultural measures—in terms of the society, climate and environment,” says Patryk.

A biologist by education, Patryk combines his passion for farming with an open mind and a keen awareness of the impact agriculture has on the natural environment. The first time he encountered the problem of eutrophication first-hand was in 2016 during a holiday in Władysławowo.

“During a one-week stay we could not swim in the sea due to the blooms of cyanobacteria,” recalls Patryk. “On our land at home, the eutrophication mainly comes down to the rapid overgrowth of field ponds and watercourses. This process is as problematic as the progress of drought—it leads to the degradation and, later, the decline of these habitats. As a biologist, I am also aware of the more global dimension of the eutrophication process and its deadly impact on marine ecosystems.”

Patryk and his family run the farm with innovative methods aimed at protecting both the cultural landscape and the natural environment. Nearly every decision made on the farm is the result of weighing the economic advantages, environmental benefits, and the amount of work required for implementation.

“Contrary to popular belief, sustainable agriculture does not need to generate additional costs and, in the long run, it is even an investment that provides added value—both for the farmer’s pocket and for the environment,” says Patryk.

Careful manure management with help from a robot

“At the foundation of every change is information,” says Patryk. “In our case, what is crucial in the decision-making process is having information about the content of the elements which are essential for fertilizing plants in the soil.”

To ensure precise fertilization, the farmers regularly test the soil and liquid manure on all their parcels to determine the nitrogen, potassium, magnesium and phosphorus content levels. They prevent nitrogen losses during fertilization by employing a subsurface injection technique, where liquid manure is injected using a modern slurry tank with a drag hose system which helps limit the release of nitrogen compounds into the atmosphere and allows for precise application onto crops that are already growing.

“Thanks to this technology, we have reduced our use of non-natural fertilizers by 50%—and, in the case of permanent grassland, even by 80%,” reports Patryk. “Furthermore, this application method limits the spread of odour.”

Another technique used on the farm to optimize fertilizer management involves a state-of-the-art robot called Lely Discovery Collector 120. It automatically removes livestock manure from the barn every half hour and deposits it into a closed liquid manure tank. This limits ammonia emissions, reduces odour and improves livestock sanitary conditions.

“Thanks to this technology, we have reduced our use of non-natural fertilizers by 50%“

Furthermore, instead of traditional straw or a mat-lined bedding in the barn, the farmers use a straw and limestone mattress to offer a safe and hygienic resting place for the animals, which helps them limit the use of antibiotics. At the same time, the bedding composition allows for the hygienization of liquid manure and buffers its pH, making it even easier for crops to absorb.

The cultivation techniques used at the farm are also aimed at minimizing the negative impact on the environment. The greater part of the farmland is cultivated using the strip till method, which allows the farm to limit both the number of operations and reduce the required amount of non-natural fertilizers, while also protecting the soils from erosion.

Another important practice on the farm that allows for minimal non-natural fertilizer use is the application of catch crops like leguminous plants. They serve as a source of high-protein cattle feed, while, at the same time functioning an effective nitrogen “dispenser” in the soil.

To further improve soil structure, and decrease the need for additional fertilization, the farmers also leave beet greens on the fields after harvest. A practice which Patryk reports allows them to save 250 kg of potassium fertilizers per hectare.

Aware of the problem of drought as a consequence of climate change, Patryk has introduced a system of gates to dam up water in drainage ditches on his land. The rainwater and drainage ditch network allows for greater water retention while minimizing the consequences of longer rainless periods. The ditches, previously dry since mid-April, are now filled with water most of the year.

“We protect our crops against water scarcity during droughts, which are becoming increasingly severe, and we limit the rate of biogenic substances runoff at the same time,” says Patryk.

Furthermore, the farmers have taken action to restore woodlots and implement several meter wide buffer zones of natural vegetation along watercourses. Since 2018, they have planted more than 600 trees and bushes with regard for the traditional field landscape of the Greater Poland area. Additionally, they have restored microhabitats which are relevant to the fauna of the agricultural landscape and installed breeding shelters for birds as well as look-out sticks for birds of prey.

“Apart from their beneficial influence on biodiversity, these habitats play an important role in rainwater retention by acting as a sponge, and help limit wind erosion,” says Patryk.

Since implementing all these measures, many positive results have been seen on Kokocińscy Farm— both financial and biological.

“The main advantage of applying these  practices was the limitation of the need for non-natural fertilizers by about 70% within the entire holding, and it obviously translates into savings,” says Patryk.

Patryk also reports being pleasantly surprised by the response of the natural landscape after improving waterbed retention and increasing the amount of natural vegetation on the farm.

“The clearest feedback that these actions make sense was delivered through the return of certain bird species which had left the area back when the landscape was impoverished,” he says.

To pass along the knowledge and insights he has gained, Patryk is currently cooperating with over 10 agricultural farms. According to him, an increasing number of farmers are taking interest in learning how they too can restore the agricultural landscape and microhabitats on their land.

“Initially, our actions were regarded as a kind of peculiarity, an eccentricity,” says Patryk. “However, as is often the case with the Polish agriculture, once we started gaining specific benefits from our actions, people started to take interest.”

In recognition of the efforts made at Kokocińscy Farm to reduce nutrient runoff, Patryk has been awarded the national Baltic Sea Farmer of the Year Award for Poland.

“It is a big surprise for sure,” says Patryk. “A small, family-run agricultural farm in the heart of Greater Poland, the landscape of which seems to have more and more features of a steppe—who would expect this? But there is also joy, of course, that our actions have been appreciated.

“Thanks to the award, we have purchased a drilling rig to replace handwork while planting. It is also a salvation for the elbows which hurt so much after digging. And, from a less material point of view, such an award is always a strong impetus to move forward. At this moment, we have already planned further projects. We are encouraging the agricultural farms in the neighbourhood and the local authorities and organizations to take similar actions, and we are quite enthusiastic to observe the change of approach taking place in front of us as well as the willingness to make changes.”

“First and foremost, we would like to show that sustainable production is not tantamount to a revolution in the making,” says Patryk. “Unfortunately, the conviction still persists that sustainable agriculture requires complex and time-consuming activities, which generates additional costs. Through our example, we demonstrate that you can run your agricultural farm in a conventional way, achieve some of the highest production results on a national level and limit the negative impact on the natural environment at the same time. An important characteristic of our actions is that they can be adopted on almost any agricultural farm, anywhere in Europe, without generating high costs and without having a negative impact on the profitability of the production.

“We would like other farmers to become aware that our agricultural farms are an integral part of the natural environment, and the success of our businesses highly depends on their condition. Even smaller practices, applied on a larger scale, can excellently pave the way to improved environmental efficiency.”

“First and foremost, the jury took into consideration Mr. Kokociński’s pro-environmental approach when running his farm, which contributes to water protection against the contamination by biogenic substances (nitrogen and phosphorus compounds). Mr Kokociński, with his family, implements a range of marine-environment–friendly practices including the maintenance of year-round plant cover, crop rotation, catch crops with leguminous plants, the use of manure in the plant production, the proper storage of natural fertilizers, the use of fertilizers in good time and under the appropriate conditions, fertilization based on soil analysis, liquid manure alkalization and the creation of buffer zones.”

Patryk Kokocinski on the future of farming

A: Undoubtedly, an increasing problem in our region is the changing climatic conditions. The increasing frequency and duration of droughts means that, in certain parts of the country, running an agricultural holding may soon be impossible. Another threat to agriculture in Europe may be the growing inflow of cheaper food from emerging markets, which European producers cannot compete with in terms of the price. Furthermore, in the case of Poland, we are still faced with unfavourable relations of the factors of production and, in particular, the abundance of labour force in relation to farmland. In the future, an increase in the specialization of agricultural farms will be a must to be able to focus the production in the hands of professionals who can achieve competitive results at both the European and global level.

A: Running a modern agricultural farm that is open to the latest knowledge allows high-quality food to be produced without posing the threat of degrading the natural environment. We must be aware that we do have an impact. Most of our country lies in the hands of farmers and it is the farmers who are responsible for its condition to a large extent.

A: In my view, the food produced on agricultural farms run in a sustainable way should be rewarded with higher (farm-gate) prices. Only in this way can we encourage a larger group of farmers to take such initiatives. As a society, we are increasingly making responsible purchasing decisions and we should be willing to recognize products that have a lower environmental impact. In this way, as consumers, we will have a real influence on the natural environment and on the competitiveness of European agricultural output.